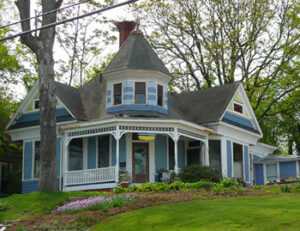 The Grant Park neighborhood was named for Lemuel P. (L.P.) Grant, a civil engineer for the Georgia Railroad who has been called the “Father of Atlanta.” As an agent for the Western Railroad Company and the Georgia Air Line Railroad, Grant helped to bring the railroad to Atlanta. During the Civil War, in his capacity as chief engineer for the Department of the Militia, C.S.A., he planned and supervised the construction of defensive lines around the city. Ater the war, he continued to serve the city as a member of the committee that named streets, member of the city council, Board member of the Bank of the State of Georgia and served on the committee to draft the new city charter in 1873.

Grant lived in a huge 1858 Italianate mansion in the center of his vast land holdings now called Grant Park. Between 1853 and 1883 the city acquired all of the land where Oakland Cemetery and the Park itself now stand, by gift or trade from Col. L.P. Grant. The remaining parts of Col. Grant’s property were subdivided between 1885 and 1905 as the building boom began on all four sides of the city’s new park properly named the L.P. Grant park. During the years 1889-1898, Mr. G.V. Gress gave the city of Atlanta the original zoo and the Cyclorama, which were placed in the L.P. Grant Park.

Grant Park, as a neighborhood, began to be populated in the 1890’s by middle and some upper middle class families. Craftsmen built many of the architecturally distinctive homes you see today. Most of the lots were shallow and narrow with unpaved alleys in the back of the houses, from the days when the city sewerage wagons had to have access to the outhouses.

The neighborhood reached its zenith around 1905. Shortly after the turn of the century, the neighborhood’s battle with the automobile began when some of the wealthier residents, who could afford to buy cars, were drawn to such faraway places as Druid Hills, Morningside and Buckhead. Grant Park remained middle and upper middle class into the 1950’s. In the 1960’s, the automobile was responsible for cutting the neighborhood in half by means of a six-lane highway. Grant Park was severely disrupted and declined in the wake of I-20’s construction.

A restoration trend began in Grant Park in the early 1970’s and the neighborhood began to blossom in the late 80s and into the 1990s. Demolition of older homes has largely been halted and new construction seeks to conform to the character of the old neighborhood. During the 1980’s, the entire area, both north and south of I-20, was placed on the national register of historic places. In 2000, the neighborhood became Atlanta’s largest Historic District, bringing additional zoning protections.