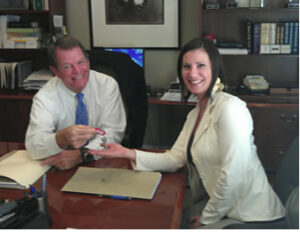 Melissa just closed on her new condo- the first home she will have owned on her own. She was able to close on this great condo at Park Central on Juniper for $1,000! When I first met with Melissa we discussed her short term and long term goals in buying this home- her dreams of owning a nail salon in Midtown area and living close to home as a new business owner would have to put in long hours. A condo would be best for her since she won’t have much time for maintenance either. We also discussed the long term investment a condo could be for her as rental down the road or a place for her children to live while in college. We searched for about 3 months losing several condos to lack of FHA approval, to bidding wars, to a unit going under contract before we could see it- but every time Melissa lost a unit we just said that’s okay we will get the next one and it will be better. Well when this unit came on the market we made an above list price offer within 7 hours of it being on the market and did end up having to compete in a highest and best offer situation- but Melissa put her best foot forward and low and behold we went under contract. We had another unit in a Highest and Best offer situation at Atlantic Station at the same time and found out that we won that bidding war as well – so now Melissa had the ability to choose what she wanted!

I was able to put Melissa in contact with a great lender at Loan South who was able to help her take advantage of a down payment assistance program and got us to the closing table with only a few minor bumps in the road. Today Melissa became a homeowner but she also has started the journey to becoming a small business owner and making her dreams a reality. I don’t know many people that get to be a part of helping someone do this- but today I was able to be a part of that and for that I am truly grateful to be a Realtor and to have become Melissa’s friend and Realtor for Life!